The Round Table • April 25, 2017 • http://www.mhsroundtable.com/featured/13-reasons-why-sheds-light-on-an-ongoing-issue/

’13 Reasons Why’ sheds light on a prominent issue 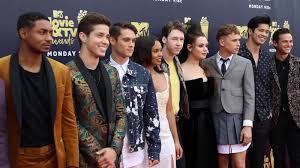 By Kim Fleming, Round Table reporter

“13 Reasons Why,” a new Netflix show, made its debut on Friday, March 31 and has taken viewers by storm. The show, based off the book by Jay Asher, follows the tale of high school junior Hannah Baker who committed suicide shortly before the start of the show.

Before she died, Baker recorded seven cassette tapes explaining why she made the fateful decision. Each side of the tapes was addressed to a different person, each of which made her life more miserable, with the exception of one: Clay Jensen.

Jensen receives the tapes in the first episode, with no prior knowledge of their existence. Arriving in a box complete with a map littered with red stars, the seven tapes were each numbered in blue nail polish.

Intrigued, Jensen borrows his friend Tony’s Walkman and pops in the first recording. After hearing the words, “I’m about to tell you the story of my life, more specifically why my life ended. And if you’re listening to this tape, you’re one of the reasons why.” He quickly began to worry what he could have possibly done to Hannah to make her kill herself.

As the show progresses, Jensen uncovers the truth about the people from his school that treated Hannah so poorly and the unfortunate experiences she had. From the star basketball player to ordinary girls who slut-shamed Hannah, each and every word these so called “friends” said to her slowly destroyed her self esteem and motivation to keep moving forward.

Clay was the one exception to this, however. When Clay finally listens to his tape, he can barely stand hearing what Hannah had to say about him. He was a perfect friend to her, no matter the situation. Little did Hannah know, Clay had an immense crush on her and she had developed similar feelings for him. It wasn’t until one night at a party did they kiss, but Hannah let her troubled past get to her in that moment. She immediately became uncomfortable and told Clay to leave her alone, but she explains on the tape that she didn’t mean it and she wanted him to stay.

Jensen breaks into tears after this because he knew he could have done something to stop her from ending his life, but hadn’t realized it in the moment. His reaction goes to show the effect of a person’s words and actions on another person’s life. No one truly knows what is going on in another’s life.

The show’s message is deeply powerful for a teenage audience. Though many of the situations are unlikely, bullying is a serious problem among modern teens. Hopefully, the depressing plot of “13 Reasons Why” will shed light on the pressing matter and encourage people to think before they act.

Overall, the casting and plot were coherent. Each actor was clearly dedicated to his or her role and did a fantastic job of encompassing the emotions of each character. The show’s plot was slow-moving, but easy to follow along with. While Clay replayed the past years in his mind as he listened to Hannah’s tapes, he had numerous flashbacks. These scenes had a warm, yellow color cast, opposed to the cool, blue color cast placed over the current scenes. Such a small detail was brilliant and significant as it symbolizes the happiness of the past when Hannah was alive and the sadness in a world without her.

One of the only annoyances of the show was the difficulty Clay had in listening to each tape. He couldn’t simply sit down and hear what Hannah had to say. Instead, Clay listened to portions of tapes and took many breaks in order to digest the information. Understandingly, it is extremely difficult to cope with the sudden loss of a close friend, but his speed dragged the show slowly forward and aggravated the audience.

Despite this, I highly recommend this show to anyone who is in for a heartwrencher. The plot is phenomenal, full of twists and revelations. Its content is heavy, including depictions of suicide and rape, so it is not intended for younger audiences.

Many aspects of the plot were left open for discussion after the last episode, possibly foreshadowing a second season to answer viewers’ remaining questions. After watching “13 Reasons Why,” viewers will be left stunned and will consider its message days after finishing the 13th episode.