The Round Table • January 14, 2016 • http://www.mhsroundtable.com/featured/a-change-in-standardized-testing-is-spreading-across-the-nation/ 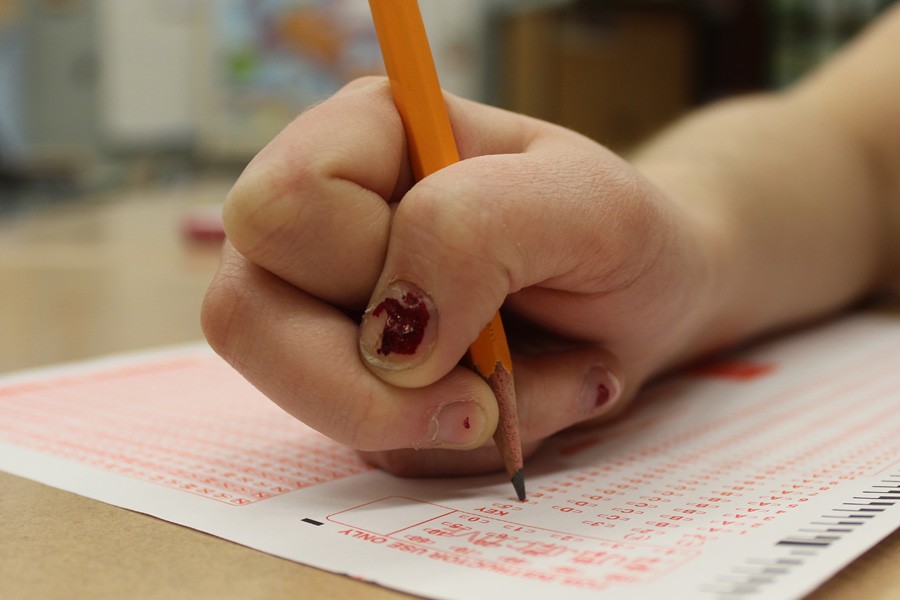 A student takes a standardized test during second block.

By Lucy Kiefert, Round Table reporter

Since its creation in 2001, the No Child Left Behind Act has been requiring schools to issue and take a state-provided standardized test every year in an attempt to show how their scores have improved over time. On Dec 10, it was replaced by the Every Student Succeeds Act, which lifted a substantial weight this method of testing previously had on student grades and teacher evaluations.

A good number of young people have seemed to show a negative reaction towards standardized testing – there have been internet memes, online rants and articles written on the subject. Many find it tedious, time-consuming and, frankly, unnecessary.

The effect that state tests have on a student’s final grade in a class or on their transcript tends to vary depending upon the teacher and the school. However one thing is always made clear: it is required, and it is important.

The ruling of the education act now states that the significance state-required testing holds is actually up to the state that provides it. This is a step in a very different direction from No Child Left Behind, which required all states to assess students on their understanding, made students who were uncomfortable with English take the exam in English, and created an environment in which the idea of passing an upcoming exam is more important than gripping the material taught in class.

It is not yet known whether or not the change in education acts will have an effect on how classes are taught. How students process information through this new structure is a discovery that is even farther in the future. However, it is a smart idea to think it through on a national, state and local level to better prepare for the possible changes.

As far as the future of Middletown High School and other schools in the area go, Transitional Education Teacher, Jim Zimmer, believes that Maryland will be “better prepared to accept changes than some other states.”

“Change happens every year – change is on-going,” he says. “I think changes have already happened and we’ll see more next year and the year after.”

In the education system, experimentation is often required in order to find out what the masses will react best to. This means that if Every Student Succeeds does cause changes in the way everything is run, the students’ reactions must be taken into account to truly know its effect.

If standardized testing is lessened, this could leave much more time for the teaching of actual material instead of forced studying for upcoming exams. Teachers may not have to necessarily center their lessons around the material that their kids will be tested on, but rather what the students need to learn or what they are struggling with.

Considering the fact that most young adults have had negative feelings towards the testing NCLB put in place, taking it away may cause previously disinterested students to be more passionate about their learning. This could, in turn, benefit teachers because, as most educators know, it is much easier to teach a child who is interested in the material being presented to them.

When asked about how students will react to Every Student Succeeds, MHS freshman, Audrey Fisher, said, “I think that it will change the overall way that students view and do their work because they will have a more positive outlook.”

It all depends on how the information is presented and the outlook students have towards it.

One specific aspect of public education that a number of families seem to be dissatisfied with is how well it actually prepares students for the “real world.” While skills like calculus and chemistry are absolutely useful to know, it is questionable whether these subjects will actually assist students in their day-to-day life – after they’ve walked out of the schoolhouse gates for the last time.

“The best thing we can do for our students before they leave high school is to help them be as prepared as possible,” Zimmer says.

Whether the change in education acts will help students be better equipped to handle life on their own is yet to be seen. However, it may help establish a more productive environment for learning in which the minds of young people are stimulated enough to help them remain engaged.

If this is what transpires, do administrators see it as a change for the better?

Jim Zimmer does, and so do numerous others.

Zimmer said that those in charge need to make sure the members of the student body “realize their abilities, and we need to continue to push them to reach for new heights.”

Every Student Succeeds might turn the curriculum upside down and empty it out in order to restore new order, or it might not.

Whatever does happen, it is a fairly widespread belief that students will meet any goals are set for them – and with ease, too.