The Round Table • November 9, 2016 • http://www.mhsroundtable.com/featured/england-has-more-to-offer-than-meat-and-potatoes/

England has more to offer than meat and potatoes 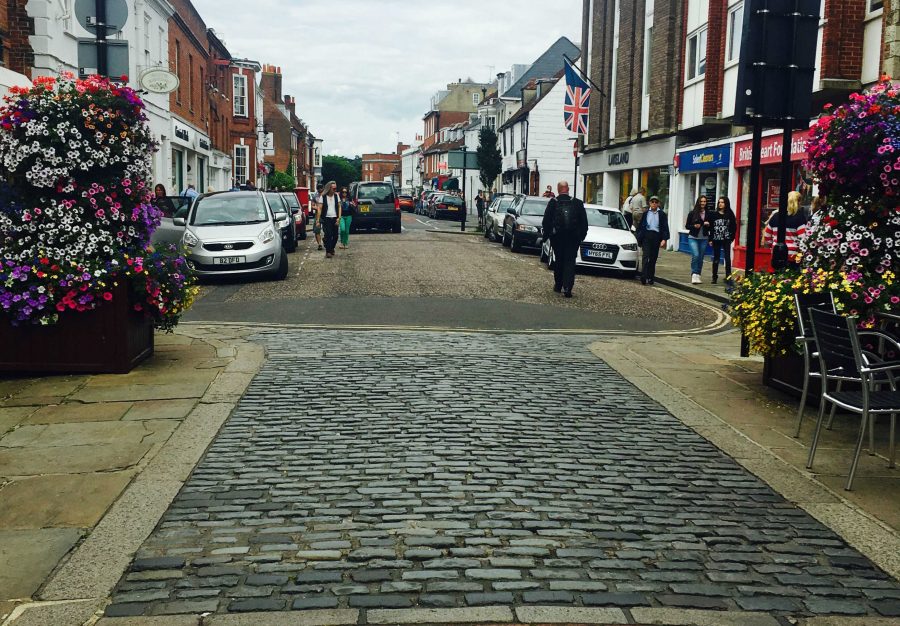 Round Table reporter Kim Fleming was walking down the streets of England when she captured this moment.

Tea. English accents. Pot pies. Small cars. More tea. Cool summers. Train stations. And then some more tea; all are characteristics of England that make it unique and make life very different from the United States.

Over the summer, I spent two months living in England and it was such an interesting experience. From transportation to food and even TV, every aspect of life is different in some way across the pond.

The language used by the English was probably one of the most prominent differences. Along with the accents, they use many different words than we do for the same thing. Among these are “rubbish” instead of “trash,” “jumper” instead of “sweatshirt,” and “balaclava” instead of “ski mask.” Once I knew what some of these meant, it was easy to understand. However, when I first got there, I had trouble understanding what anyone was talking about for the majority of the time.

In addition to words such as these, the mannerisms of people are different from those in the United States and they always caught me off guard. One of the best examples of this is when, instead of asking, “How are you?” people ask, “Are you okay?” Because I am accustomed to people asking if I am okay when I’m sad or when something has happened to me, it was alarming because it seemed out of context. This is one phrase I never got used to people saying all of the time.

Transportation is another one of the different aspects of living in England. Driving on the left side of the road was so strange to me, although by the time I got back home I thought driving on the right side was strange, too. I lost track of the amount of times I accidentally got into a car on the driver’s side, thinking it was the passenger’s. Most cars in England are manual, as opposed to the automatics that most people prefer to drive in the United States.

The cars in England are also relatively small to fit the narrow roads. Many English roads go through fields and hills and are extremely narrow and winding. Because of this, it is difficult to go fast and it takes a while to travel far distances. There are few motorways, as opposed to our massive highway system.

Buses and trains are a popular method of transportation in England and are extremely different from the metro or buses we have in America. Train and bus stations are located in most towns and cities. From the station where one boards the train, that person can go to almost any place in England. I took a train into the cities of Portsmouth and London from the town of Chichester (all in southern England) and it was much quicker and easier than taking a car.

Over the course of the summer, I was able to travel by ferry three different times, crossing both the Irish Sea and the English Channel: from Ireland to Wales; from England to Holland; then back to my English home. The ferries in Europe are like small cruise ships, where the cars and lorries (a lorry is a large truck or a horsebox) park down in the bottom of the ship. The people can go up to the cabins where they can sleep, eat at a restaurant, shop or even watch a movie in the cinema. Taking a ferry to different countries was such an incredible experience as I had never been on a big boat before and there were many things to do on the ship.

The food in England is something else that’s very different from the states. In England, they have breakfast, lunch and tea, which is what they call dinner. Meals typically consist of meat and potatoes, although salad and pasta are also popular dishes.

The English drink tea all the time (yes, this stereotype is 100 percent true). I remember when my English family (who were actually Welsh but moved to England 18 years ago) would ask at least once a day, but probably more, “Does anyone want tea?” They often made fun of me for being more of a coffee person, but eventually I did acquire a taste for some nice English tea.

There are many foods from Britain that I miss so much as they sadly can’t be bought in the United States. My personal favorites include steak bakes, which are square pastries filled with a delicious, tender steak filling; digestives, which are circular tea cookies that taste like graham crackers; and corners, which are yogurt cups that you pour cookies, such as digestives, in before you eat it.

With America being home to so many different foods, it was disappointing to find that we do not have some of these delicious snacks.

Cadbury is a whole other topic by itself. The vast variety of candies that Cadbury produces in Europe is astounding. Most of the sweets, such as Daim, Boost or Wispa Gold, I had never even heard of until I bought them at a petrol station. I wish we had some of these in America instead of the plain milk chocolate bars they typically sell.

Something I was able to cross off of my bucket list over the summer was visiting a McDonald’s restaurant in another country. The experience: extremely satisfying.

The food was much less greasy than that in America and they even had some different food choices, including Cadbury McFlurries. The fast food chain seemed much healthier than it does here. It was also the only place I visited in England that called fries by the same name we do as opposed to “chips.”

Shopping in England took some time to get used to. In Great Britain, the currency is GBP, or pounds (also called quid). When I was there, the exchange rate was working against me, as one USD was equivalent to .75 GBP, which made everything much more expensive than in the U.S. However, once I became accustomed to paying in pounds, I compared the prices to those of America less often.

Paying in cash was very stressful because the English have so many different coins and I had no idea what any of them were worth. I always had find the right coins to pay with. After about a month, I finally learned what the 1 Pound, 2 Pound, 50p, 20p, 10p and 5p coins all looked like. The notes were much easier to pay with.

The English weather was lovely. I was there from the beginning of July to the end of August and the summer there is colder than in America. The temperature also stayed the same from early to morning to late evening. I often dressed in jeans and a sweater or sweatshirt for going out during the day and for dinner. It rained quite often, but it was always a light, persistent rain instead of the unpredictable downpours we can get here.

British television was extremely entertaining. With my family, we most always were watching rugby or football (soccer). However, we would also watch random shows, such as “Slow Train Through Africa,” which was about a man experiencing the different African cultures while traveling on a train. We also watched “Katie Price’s Pony Club,” which was a reality show that aired on TLC UK and featured British TV celebrity Katie Price, who created a pony club for her two children, Junior and Princess.

There was also a channel that aired American TV shows including one that my family seemed to enjoy watching, “American Pickers.”

When the 2016 Rio Olympics began, we would watch them every night. BBC did a fabulous job of covering them. It was so interesting to see that even though they primarily focused on Team GB’s success, they also covered other countries’ star athletes, such as Simone Biles and her amazing performances in gymnastics.

Netflix changes its shows when you travel overseas. When I first went to look at my Netflix account in England, I noticed that all of my suggested shows and movies were British, except for one in the category labeled “US TV Shows.”

One thing that was slightly amusing to experience was when people would compare me to the typical American stereotype. Multiple times people would come up to me and say “I thought all Americans were fat,” or “Don’t you eat McDonald’s every day in America?”

It was funny to answer no to questions like these, as some people became confused or even disappointed to find out they were so misinformed. Some even proceeded to do their best American accent or mock the way I spoke, in a non-offensive way.

Of course, this often led to conversations about cultural differences, which were always fun and interesting to be involved in.