The Round Table • January 2, 2018 • http://www.mhsroundtable.com/featured/scouting-for-civility-with-middletown-boy-scouts/ 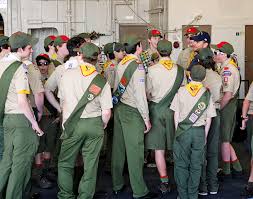 By Juliana Foster , Round Table reporter

Boy scouts of all ages and volunteers across Middletown came together on November 12th to gather food to restock the Middletown Food Bank before Thanksgiving. Scouting For Food is held all across America, but that weekend, our very own small town helped those who couldn’t help themselves.

The food is collected in a very organized and effective way. According to Troop 476 Scoutmaster Joseph Stann, and Aaron Rosner, Troop 476 (Middletown Middle school) and William Foster, Troop 476 (MMS), weeks prior to the drive, the Boy Scouts went around Middletown and put a bag on every person’s doorstep and asked the residents of the home to please fill the bag with food then put it out on the steps to be collected on the 12th. Then, the day of Scouting for Food, the boys, as young as 7 years old, went and collected every single bag, then organized the food for hours.

People enjoy helping people because of the satisfactory feeling a person gets after helping people in such a big way as feeding them. The boy scouts, from young boys to young men, did just that at the food drive. Joseph Stann said, “It of course makes me feel good to have assisted in helping to provide for so many….. I feel a huge sense of pride to be able to see so many youth from the community cheerfully doing the majority of this work.” One of the young boys, Aaron Rosner, who volunteered with the drive also said that it makes him, “feel good,” because he knows that, “in the long run you’re saving lives.”

The food drive this year was also hugely successful. “I think that it was very effective because it saves lives every year,” Foster said, “the food collected can last months for the people who can’t afford it.” Rosner gave exact statistics on the drive saying that they collected 6,847 items of food total, approximately averaging out to 2,000 pounds of food.

Even though the Food Drive ran very smoothly, anything can be improved upon. “We had some issues with a lack of tables, and the inevitable report of a few houses or a street that either didn’t get bags dropped off to them or picked up from them.  Always though the biggest variable in the amount of food collected is how much people are willing to place out on their front porch for us to collect,” said Stann, but besides the few minor setbacks, the drive was a success.

Being in the Boy Scouts is supposed to help shape a young man’s life though community service to survival training. Chad Foster, volunteer at Scouting for Food, and former Eagle Scout remarked that it teaches children “that we have a responsibility for taking care in our communities. It also helps to give young people some perspective on what is really important in life.”

The food bank is now full and the food collected is expected to keep it full for up to five months. “It’s a wonderful feeling to look inside the food bank and see all of the items that have been donated,” Trent White Troop 476 (MMS), “and all of the lives that are being influenced.”