The Round Table • January 21, 2020 • http://www.mhsroundtable.com/the_latest/jumanji-the-next-level-movie-review/

Review: “Jumanji” takes it to “The Next Level” 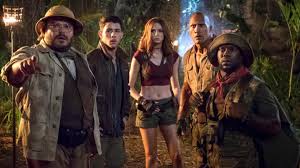 A few years ago the classic Robin William’s fantasy/comedy movie Jumanji was remade with a bit of a modern twist on the original. Just last month a sequel to the 2017 version of Chris Van Allsburg’s 1980s children’s book was released in theatres. The movie made $59.3 million in just two days, and the profits continue to pour in. New and old fans flocked to the theatres as soon as it was released, and I was one of them.
I had very high hopes going into the theatre to see Jumanji: The Next Level , as the first one really impressed. The original 1995 movie was high on my list of favorite films, and has been matched by its successors. While the stars of the movie may not be the late but loved star Robin Williams; Dwayne “The Rock” Johnson, Jack Black, Kevin Hart, and Karen Gillan somehow managed to carry on his legacy nearly 25 years later. Other cast members include Dany Devito, Awkwafina, Nick Jonas and Danny Glover, making Jumanji II an impressive all-star cast. The almost chemical comedic bond between the actors and actresses made for a movie that kept me laughing for nearly the entire 2 hours of action packed jungle adventure.
The first “remake,” Jumanji: Welcome to the Jungle ended with the game, now in video game form, being destroyed, and looked like it’d be the end of the iconic adventures. However the sequel picked up only a year after the last ended, this time with much needed comedic relief, Danny Devito, as the friends from Welcome to the Jungle have all separated and gone down their own paths. When one of the foursome goes missing however, the rest don’t hesitate to jump back into the world that nearly killed them the year before. Once back in the Jumanji universe, they face an unexpected and entirely new set of challenges.
The Next Level tells a story of the challenges of growing up and leaving your friends,a real world problem, through an action packed fantasy/comedy/video game movie to be enjoyed by any audience. I would recommend this movie to anyone needing a good laugh and an overall good time.