The Round Table • June 8, 2017 • https://www.mhsroundtable.com/archives/article_entertainment-news/vinyl-makes-a-comeback-among-todays-youth/ 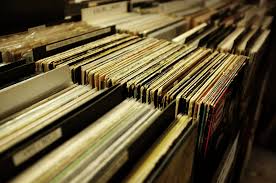 Though the average youth is satisfied with the convenient comfort of digital music, all beneath one screen and neatly packed into his virtual library, many teens and twenty-somethings long for something more tangible, something they can slide in and out of a cardboard cover with sentimental wear-and-tear.

These exceptional few are not as abnormal as they may think.

In the past decade, as the emergence of digital music has slowly become old news, and as softwares such as iTunes have lost their lustrous novelty, there has been an increasing demand throughout the United States and beyond for a long-forgotten method of listening. It is easier to damage, harder to find, but as many members of today’s youth are beginning to realize, irreplaceably unique.

The item in question is vinyl, of course.

Yes, the shiny black circles that were once viewed as obsolete upon the debut of CDs and MP3s are now being transferred from milk crates and musty basements to the bookshelves of high school and college students to serve as proud proclamations of their reverence for the past.

As Middletown High School junior, Erin Cowan, says, “A lot of people like the aesthetics of older ages. It adds to the whole listening experience.”

This resurfacing appreciation extends far beyond a certain age group, however; musical artists such as Jack White of The White Stripes and Dave Grohl of Foo Fighters have been outspoken proponents for the resurgence of this abandoned art, and have both served as ambassadors for the worldwide holiday Record Store Day that saw its first celebration in 2007.

Such promotional methods have inevitably caused a spike in sales at both international chains, like Urban Outfitters and Barnes and Noble, and small town shops (in Frederick County’s case, hotspots like The Record Exchange). Cowan, along with MHS junior, Liam O’Byrne, and MHS sophomore, Jack Frey, cites The Record Exchange as a go-to source for cheap, accessible records that aid the guttural need many music fans feel to hold their favorite artists’ work in their hands, sometimes after an unexpectedly satisfying search.

“I love seeing what you can find,” Cowan says. “The feeling when you get a nice record, and it’s not scratched – it’s kind of the best.”

“Sometimes,” Frey says, “you find [a random album] for two bucks at a record store, and it turns out being one of your favorites.”

Contrary to the idea that young people only possess a long enough attention span to sit through a few songs, a particular aspect of vinyl that Frey and O’Byrne enjoy is its ability to make divulging in music an activity rather than an afterthought.

“A lot of times, people like to multitask,” O’Byrne says. “But with vinyl, it’s nice to just sit down and listen to it with nothing else on.”

“It’s satisfying to put it on the player, cue it, and hear the crackles,” Frey agrees. “It allows music to be more of a hobby for me.”

Owner of The Record Exchange, Sam Lock, has definitely noticed an increase in popularity as a result of these growing desires, saying that Record Store Day participation and vinyl appreciation in general has “become a bit of a monster.” Obviously, trying to keep up with the ever-increasing demand for something that was once seen as blandly traditionalist is a challenge, especially for stores like The Record Exchange whose acquired stocks consist most heavily of secondhand records brought in by prospective sellers.

Despite all of this, however, the main reason behind vinyl’s return, aside from the small joys it can bring, seems to be up for debate. Perhaps the most obvious cause is the heartfelt notion of parents passing down the tradition to their children; this is certainly what served as a catalyst for O’Byrne and Frey’s sparked interest. Both inherited a majority of their personal collections from their fathers, either as a result of advancing technology or simply to foster a bonding experience.

“A lot of people are picking up their parents’ vinyl collections,” Lock says, “and it allows you to listen to an album in the order it was supposed to be listened to.”

Another reason behind vinyl’s revival is arguably what caused it to fade in the first place: it is imperfect. The scratches and echoes, and the rises and falls of the needle are not myths, but rather, real, ambient additions to any album lucky enough to make its way to the turntable. In contrast to the squeaky-clean sheen of a digitally produced tune, vinyl records possess an enveloping coziness (crackles and all) that is impossible to find through the speakers of a laptop or phone.

“I can’t describe it,” Cowan says, smiling. “It just sounds so much better.”

Lock agrees with this fact, noting that it’s “much warmer,” but also emphasizes that the right set-up is important in order to truly enjoy the distinct tone of a vinyl record. “If you’ve got 100 dollars,” he says, “go out and spend it on a nice, used turntable – a Panasonic or a Yamaha – rather than a brand new Crosley. They ruin your records.”

More experienced music aficionados, having gained experience with what collecting vinyl entails, seem to view the listening format more as a craft than as a fun trend to partake in. But maybe vinyl’s rebirth isn’t a trend at all.

It is already serving as protest against the detached technology younger generations have been exposed to all their lives. And maybe this rebellion is not to be feared, but instead, to be celebrated.

O’Byrne says that this diversion from the norm to which his age group has grown accustomed is “refreshing, but not in a bad way.” “It’s healthy,” he says. “We need something to sit us down and show us, ‘This is the way it was, and it was cool.’”

No matter how many reissuances there are of the classic albums enjoyed by past generations, no matter how many pop artists request that their radio-friendly hits be pressed to the fragile black discs they grew up on, there will always be those who view vinyl as the way of the past. It fell before, and there is the possibility that it could again, once it migrates to the back of consumers’ minds like cassettes and 8-tracks once did.

But for now, vinyl isn’t going anywhere. It’s back and better than ever, and young people are here to make sure it stays that way.