The Round Table • November 15, 2013 • https://www.mhsroundtable.com/archives/article_sports-news/football-middletown-gets-ready-for-playoff-showdown-vs-poolesville/

Football: Middletown gets ready for playoff showdown vs. Poolesville

The town of Middletown will turn their collective attention to Knights Field on Friday as their drive for a three-peat starts. 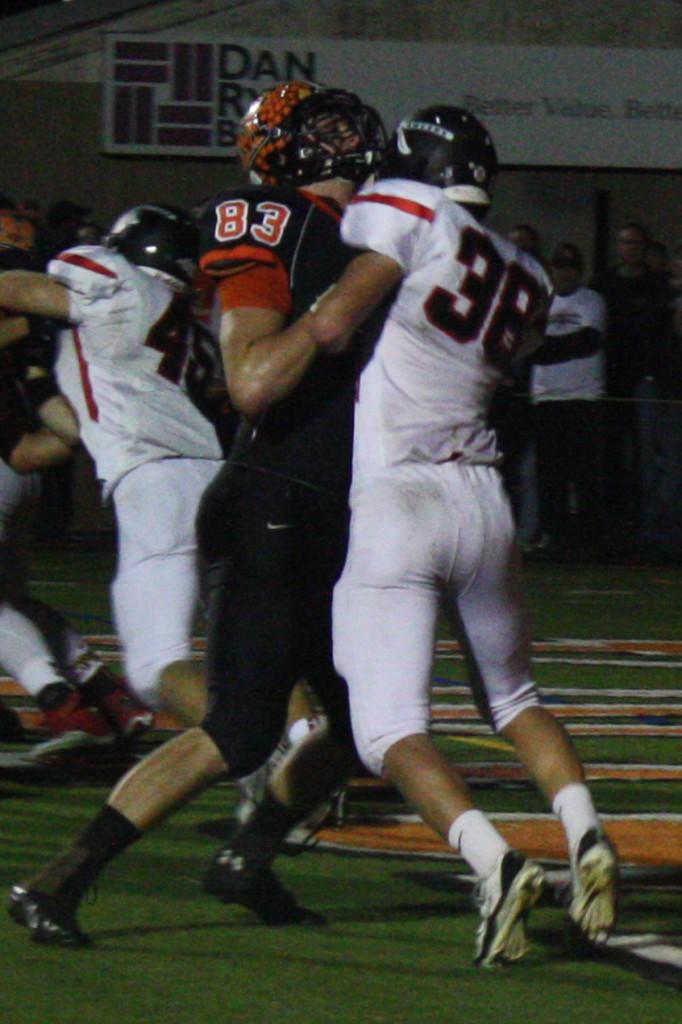 The Middletown High School Knights football team and the Middletown community as a whole have become accustomed to making the playoffs throughout the past years.

The last time the Knights weren’t competing in the playoffs come early November was back in 2004 when the Knights when 5-5, paltry to the standards of Middletown.

Since, then things have been headed exponentially upwards with nine consecutive state playoff berths, and recently more accolades and accomplishments than there are Big Macs at a McDonalds.

So, when November rolls around, the sleepy communities of Middletown, Myersville, and Wolfsville get a bit of rocket fuel injected in to their mind as they follow the Knights progress as they head towards the state championship game in Baltimore.

And their hunger for success during the playoffs is understandable as up until 2011, the long and storied football program had been held up from any state championship glory just missing out on the title on several occasions with chances in 2010, 2002, 1991, and 1981 coming just short of the prized piece of hardware.

So on October 15th the collective minds of a good portion of the people who have kids at MHS, or live in the area, or who are alumni of MHS will shift to that 120 yard piece of turf as Middletown will take on the Poolesville High School Falcons in the regional semifinal round of the Maryland Public Secondary Schools Athletic Association (M.P.S.S.A.A.) 2013 2A State Football Tournament.

The Knights will start their quest for a third consecutive 2A State Championship after a regular season in which they dominated their opponents both physically and statistically.

The Knights had many eye-popping statistics from games throughout this year but most of them came from the team side of the equation.

The Knights rushing the ball have almost unstoppable and when combined with their rush defense it would be ill advised for any team to try and run the ball on the Knights.

Even more impressive is the fact that Middletown has 42 rushing touchdowns compared to 5 from their opponents.

The success rushing the ball for Middletown can be traced back to a group of backs that has been the go-to during any situation.

The Knights have had seven players rush for over 100 yards, with Knights seniors Bradley Rinehart, Tim Pirrone, and Frankie Meighan leading the way for Middletown with 889, 368, and 308 yards respectively.

Pirrone has also had a breakout year when it comes to an area that most quarterbacks would excel out naturally; passing the ball for big yards.

Pirrone has gained 101 more yards over 10 games this year than he did over 14 games during last season which can be attributed to his maturing process as he has developed more of a feel for finding the open receivers in crucial situations.

The breakout game for Pirrone came during Week 8 against the Governor Thomas Johnson High School Patriots in a game that saw Pirrone complete 12 out of 17 passes for 151 yards and 2 touchdowns.

It would have been a perfect game for Pirrone if not for one interception but still the success of Pirrone has been a good indicator for how well the Knights’ offense has been functioning throughout the playoffs.

The Knights offense will look to keep up the positive play when they take on the Falcons against a Falcons team that just managed to sneak into the playoffs at the expense of the Oakdale High School Bears who the Knights defeated in Week 10.