The Round Table • April 13, 2017 • https://www.mhsroundtable.com/archives/round-table-staff/young-adult-authors-visit-middletown-high-school/ 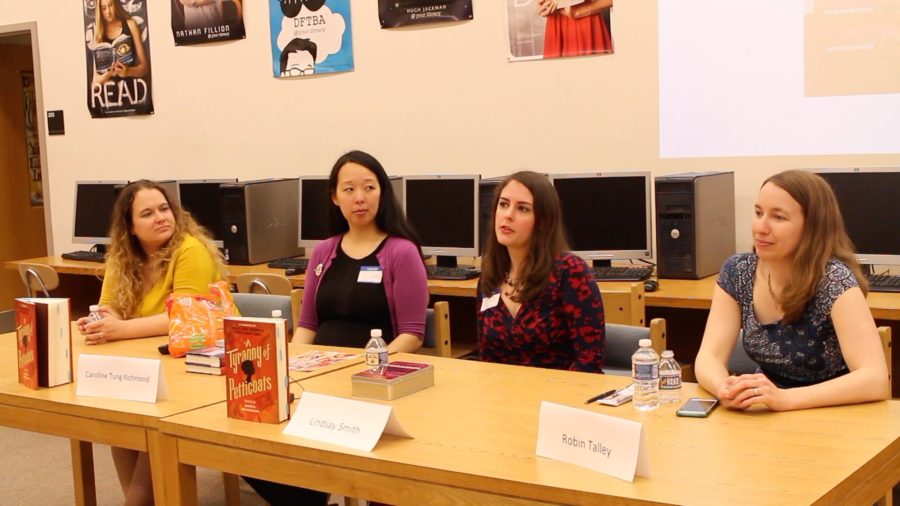 By Katie Athey, Round table reporter

Middletown High School teenagers and teachers flooded into the MHS library on March 28th to listen to four authors, Jessica Spotswood, Caroline Tung Richmond, Lindsay Smith, and Robin Talley, share their perspective of being a writer.

The four women all helped contribute to the anthology, “A Tyranny of Petticoats”. Spotswood, who also claims the editor title for the book, had the original idea to publish this book. The anthology is a combination of multiple historical fiction short stories about fierce, independent women in their time period. She explained how she had read a multitude of historical fiction anecdotes where the main character is a male, so she wanted to create a book where it highlights the important roles females played in history.

When Spotswood first took on this project she needed to captivate other authors with her idea, so they would be willing to partake in the publication. She did not want to limit the authors to one archetype themselves, she wished to gain “diversity for the characters and the author’s writing them.”

This aspiration of diversity was apparent within the four authors that visited Middletown. Smith and Talley’s main characters were a part of the LGBTQ community, which helped bring even more strife for the characters considering how dismissive the thought of homosexuality was until so recently.

A dominant factor for all writers is inspiration, and where they may find it. Tung-Richmond felt compelled to write her story based on a city that had affected her life, Washington D.C. She was raised in Montgomery County, spending much of her time going to D.C. where she was infatuated by the history. Therefore, when given the opportunity to provide a historical narrative, she knew immediately where the location would take place.

After the authors informed, and further promoted their book, there was an opportunity for the audience to ask questions.

The authors gave advice on how to tackle the hard job of becoming a writer. They all agreed that if an author reads a large quantity of books the quality of their own story will improve. The “more words you take in, better words you’ll put out,” Talley shared.

Tung-Richmond shared that another aspect to being a better writer is having a good critiquing partner. This is someone who cannot just edit your work, but share their opinion on a writer’s various ideas. Sharing your work with people you trust is important as well, added Spotswood.

The four authors kept the question and answer portion entertaining, throwing jokes at one another and the audience about their various ups and downs of being a writer.
Being a part of the creative writing industry can come with various challenges, but a difficulty that towers over all others is writer’s block. Authors deal with this conflicting problem in multiple ways. Sterling shared how she has multiple projects always going on at once, so if one falls through she can rely on another. She also said there is “nothing wrong with scratching something and starting over.”