The Round Table • March 22, 2017 • https://www.mhsroundtable.com/featured/a-different-march-madness/

March Madness is a different game to me 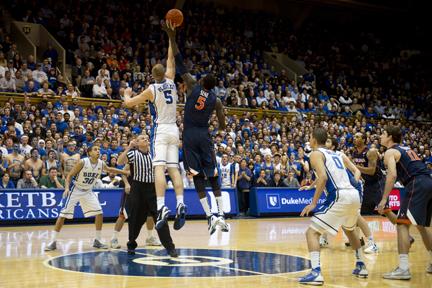 By Meg Kady, Round Table Reporter

This is March Madness from someone who loves it but doesn’t know much about it. Sure, I make my bracket and understand that a lower seed number is better than a higher one, but that is about it.

I am not dumb when it comes to basketball, but I don’t have the time to research for months in advance or commit my whole days to watching basketball during the early rounds of games. It may sound crazy, but there are people I know who live for Selection Sunday because they know that in a few short days they will be sitting in a sports book for hours on end watching games that the rest of society may tune in to with less enthusiasm.

Let me explain why March Madness is so important to my family. One year many years ago, my dad went to Las Vegas to watch the games. He was saving a seat for his friend when a woman walked up and asked if that seat was taken. He said no and that she could sit there. That woman is my mom.

She was from California and decided to move all the way to Maryland after just a couple dates. One could say that March Madness has had some significance to my family

So where does that leave me? I’m 17. I can’t go to Vegas. But I’ve still got March Madness in my blood, so instead, I’m going to give kind of bullet points to explain.

Keep in mind that I live in Maryland, my grandpa went to UCLA, and half my family attended WVU. Here is my update so far on how the tournament is going after the first two rounds.

First things first: Mount St. Mary’s from nearby Emmitsburg, Md., made the tournament, which was a big deal for people around here. They were only down by 1 to defending champion Villanova at the half after holding the Wildcats scoreless for the first four minutes of the game. In the end, however, they did end up losing by 20.

Maryland, a No. 6 seed, lost to Xavier, a No. 11 seed, which was an upset around here, but it wasn’t a real surprise to anybody who had watched the Terps tail off at the end of the season.

Middle Tennessee State University, a No. 12 seed, beat Minnesota, a No. 5 seed, proving that they were not a one-year wonder after last year’s upset of Michigan State, a No. 2 seed.

No. 11 seed Rhode Island won its ninth straight game, beating No. 6 seed Creighton by 12 points. I had Creighton advancing three rounds in my bracket, so that was an upset to me.

Wisconsin beat Villanova in a huge upset by only three points. It really came down to the last seconds of the game and was a nail biter for fans of both teams.

South Carolina will be in the Sweet 16 for the first time in the team’s history after beating No. 2 seed Duke. As loyal Terps fans, my family was happy to see Duke lose. Plus, my cousin will be attending South Carolina next year in the fall, so that was exciting.

Xavier continues to upset, the most recent being FSU, with a whopping blowout of 91-66. This will be their second time in two years making it to the sweet 16.

Kentucky’s victory against Wichita State was not as easy as most expected with the final score being 65-62. It was Kentucky’s trio of freshman that really helped the team get the win.

Moe Wagner helped Michigan pull through for the win, 73-69, over No. 2 Louisville with a career-high 26 points. They will be attending the Midwest Regionals in Kansas City, Missouri, where they will face Oregon.

You can always yell “defense” when watching a game because there is always a team on defense and they are usually not doing as good of a job as you want.

When the players fall, don’t freak out. Been there done that, but it gets exhausting because they are constantly flopping and lying there on the court. It seems more for dramatic effect than anything.

You don’t actually have to tune in until the last 5 minutes to know what is going on. Sure, you probably couldn’t give a detailed report of the game, but if there is someone in your life you want to impress, tune into the last five and you will be able to learn key players and the type of game they have been playing.

What does all this mean? This year has balance. Upsets? Yes. Favorites? Yes. The problem with balance is that it can go either way without much effort. Who is going to win? At this point it could almost be anyone’s game, and that is why it is called March Madness.