The Round Table • March 9, 2015 • https://www.mhsroundtable.com/featured/battle-of-the-phones-depends-on-who-is-listening/

Battle of the phones depends on who is listening 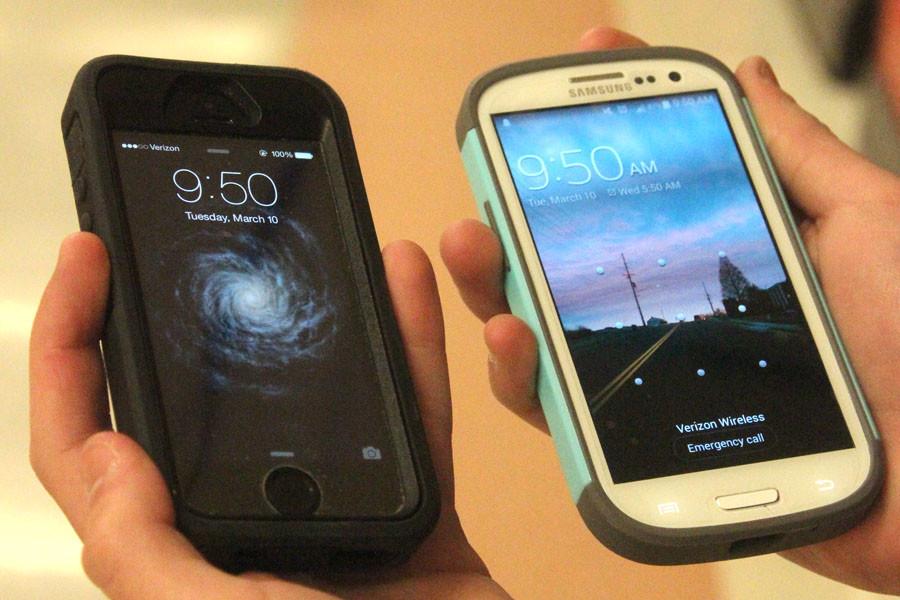 By Laura Myers, Round Table reporter

It is 2 o’clock on Black Friday morning as Middletown High School freshman Carrie trudges down the long mall hallway, window shopping as she passes each store. When she passes the AT&T store, she glances in the window and notices a sleek new Apple IPhone 6, then displayed right beside it the new Galaxy S5 from Android. She pulls her old Blackberry from her pocket and compares it to the newer looking ones. A thought runs through her head: maybe she should ask for a new phone for Christmas. But which phone should she get?

Since 2007, Apple has been producing iPhones prolifically, releasing 11 IPhones in the past eight years. Along with the updated phones, Apple has also included IOS updates that fix bugs in the device.

On the other hand, Android produced its first smart phone, the HTC Dream, in 2008. Android was originally developed by Google for touchscreen devices.

People who are looking at investing in a new smart phone need to be aware of what each phone has to offer so they choose the right phone for them.

“I have the Samsung Galaxy S5 because I believed at the time it was the best phone.” MHS senior Dylan O’Toole said. “I like that is has a large screen, it has great battery and it is almost impossible to break because Android phones are made with plastic while IPhones are made with glass.”

On the other hand, MHS senior Brianna Pickhardt said her dad had a lot of problems with his Android while her mom never had any problems with her iPhone. So she choose what she thought was the better option, the iPhone.

There are really only a few differences between the iPhone and Android phones. One difference is while the iPhone has different generations, Android actually has a variety of different phones, so each phone has its own unique characteristic, whether it is a large screen or better picture quality.

Nick DeSimone, MHS junior, has had the HTC Incredible 2010 for three years and it still works well. “I like the picture quality and amount of social media I can share and battery life,” he said.

With a Droid Razor, MHS junior Peyton McCracken likes her phone because of the “free music apps.” She can get any song whenever she wants for free.

Pickhardt said, “I really like how my iPhone syncs up to my Mac so everything is organized and backed up so I don’t lose any files.”

All Apple products are connected with iCloud that enables people to back up all of their data. This is similar to how Android is connected to Google, which saves all data, also.

Senior Lauren Langworthy said, “I like the iPhone because it is smaller and has a home button. “ The iPhone has one button, which will always navigate people back to the home screen, whereas Androids have three buttons: home screen, setting and back.

Most people in the world get their phones off of a plan. This allows text messaging, phone calls and data to be bought as package deal. When signing up for plans, people can choose to do a two-year deal. This deal results in upgrading the current phone every two years.

When there is an upgrade, people have the option of changing phones or switching to the newest version of the phone they have.

When asked what it would take to switch phones, O’Toole said, “I would not change to an iPhone because I like to be different and I believe and will continue to believe that Android devices are superior.”

However, DeSimone said it would take his “contract to be up.” He hasn’t decided whether he would stick with an Android or go to an iPhone; he said he might choose the IPhone “just to fit in.”

It all comes down to what a person prefers most in a phone. Whether it is having the best camera quality or being the most durable, each phone has its own perks.