The Round Table • October 10, 2014 • https://www.mhsroundtable.com/featured/football-knights-looked-to-stay-focused-win-third-staright/ 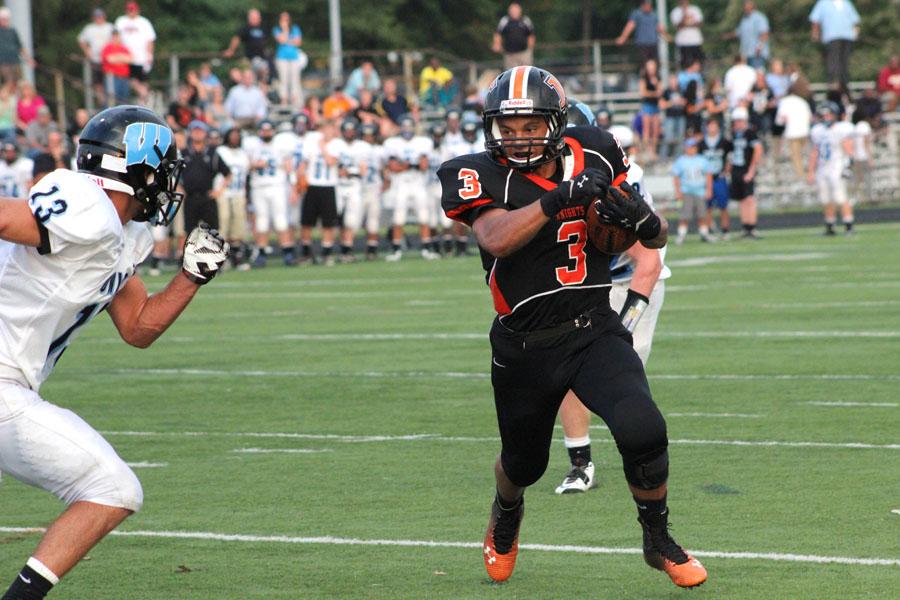 The Middletown High School football team has seen this type of game before, but the outcome didn’t turn out the way the Knights were hoping it would.

When Middletown took the field against Boonsboro in its second game of the season it was expected to be an easy win for the Knights, but the Warriors dominated the game and took down the Knights, 28-21.

After the loss to Boonsboro the Knights looked into the mirror, and knew something had to change. The next two games were hard fought victories for the Knights, against Walkersville and Tuscarora respectively.

This improved the Knights record to 3-2, as they now sit above .500 for the first time this season.

The Knights head into tonight’s game against Frederick (2-3) riding a high, but they are determined not to fall into the same trap they did against Boonsboro.

“You just have to focus on what you do,” said Knights senior Alex Cartner. “You have to expect it to be a dogfight every time you step on the field.”

It was certainly a dogfight the last time the Knights traveled to Frederick in 2012. The Cadets held the lead for a majority of the fourth quarter, but a Brad Rinehart interception in the final minutes set up the Knights for a victory, 28-25.

“Last time Middletown played at Frederick they almost lost,” said Knights senior tailback Nick Welch. “We just have to treat it like any other game.”

The Cadets have had their fair share of struggles this season though. Frederick’s record doesn’t come close to telling the full story of their season.

The Cadets won their first two games against Century and Watkins Mill respectively, but from there, their season took a turn for the worst.

The next three games against South Carroll, Tuscarora and Linganore- the Cadets were outscored 158-18. Those are three tough opponents, but also three disastrous performances from Frederick.

The thing that stands out the most about the Cadets season up to this point is their 48-6 loss to Tuscarora, a team the Knights beat 38-35 last week.

Even with the shaky start from the Cadets, the Knights won’t let their guard down.

“Frederick is a good team, and we know it’s going to be a tough game,” said MHS senior safety Nick Forbes. “It’s going to be a dogfight for four quarters, and we’ve been focused on that all week.”

Tonight is a must win game for the Knights if they have any intention of keeping their streak of nine straight playoff appearances alive.

In the second half of last week’s win against Tuscarora the Knights seemed to grow together as a team, and began to resemble the type of team Middletown fans are accustomed to seeing.

“We just have to go out there and play Middletown football,” said Cartner. “We can’t let anything get in the way.”

That mentality was on full display by Welch, Marquis Lauer and the Knights offensive line against Tuscarora. The Knights rushed for 467 yards, Welch led the team with 195 rushing yards to go along with three touchdowns.

Welch has a total of 776 yards on the ground to go along with 11 touchdowns.

No matter how good Frederick may be, the Knights know that this game could potentially play a huge role in determining whether or not they will play postseason football.

“Coach [Kevin] Lynott has made this very clear to us, we need to be ready for a tough game,” said Forbes. “We are going to go out there and fight for 48 minutes.”