The Round Table • May 25, 2017 • https://www.mhsroundtable.com/featured/former-mhs-male-cheerleader-makes-the-ravens-cheer-team/ 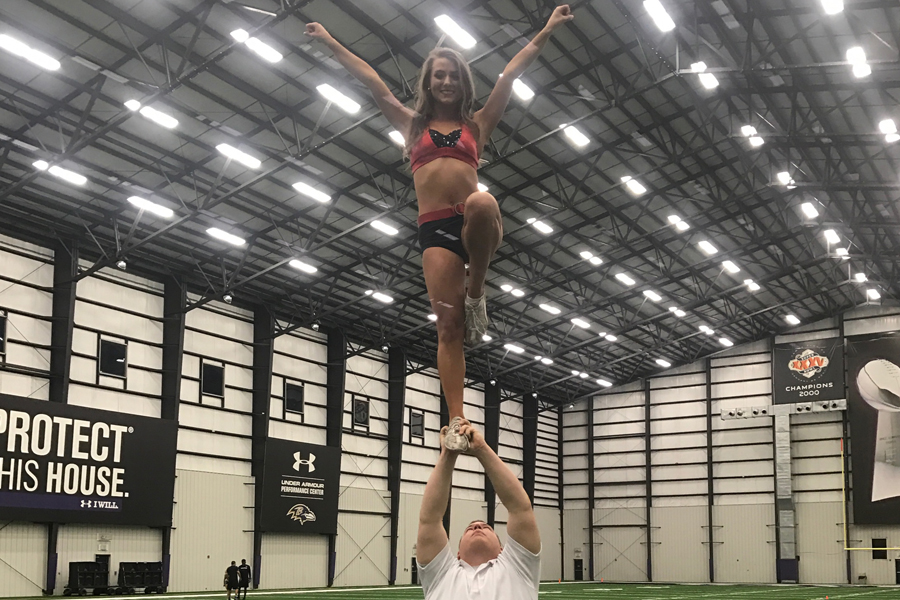 Couper is one of six new male recruits for the Baltimore Ravens cheer team. He practices stunts twice a week with fellow teammates for the upcoming season.

By Abbe Pannucci, Round Table reporter

Friday Night Lights are the highlight of the fall season in Middletown. Driving over Braddock Mountain and into the valley at 7 o’clock on a Friday night, one will start to hear the clash of football helmets, the roar of a spirited crowd and the marching band playing stand jams.

In the stadium, a wall of screaming and clapping fans decked out in black and orange tower over a bright green football field speckled with graceful football players. Leather brown footballs fly as each team warms up for the triumphant night ahead.

On the sidelines, peppy cheerleaders lift the spirits of the anxious crowd even higher. Each cheerleader wears a sparkly, long sleeve shirt and a miniskirt. Except one. Couper, a male cheerleader at Middletown High School.

Couper, Class of 2016 graduate and former cheerleader for the football and basketball teams at MHS, is now a member of the distinguished Baltimore Ravens cheer team (the Ravens only allow their cheerleaders to be identified by first names).

Couper began cheering during his sophomore year at MHS. He was first approached by the coach of the basketball cheer team, who asked him to try out for the winter season. At the time, Couper was on the junior varsity football team. After talking with his family, he decided that he would try cheering and went on to become one of three males on the MHS team.

“At first it was hard,” said Couper. “A lot of people made fun of the guys on the team because it was so different for a guy in Middletown to do cheerleading.”

Couper and the other males on the team that year, Tristan Wegner and Joe Haddad, were able to stick together to support each other through the stereotyping eyes of their some of their peers.

Cheerleading was completely new and different for Couper. He said that in addition to learning cheers and stunts, he had to learn to use all new muscle groups that were different from the ones he used in football.

During practices, the males on the team would lift weights while the girls learned dances. When the girls were finished dancing, the entire team would practice stunting, which is where Couper played a huge role.

“It was very difficult, but I enjoyed it from day one,” said Couper.

Couper describes his high school cheer team as his family. He said he is thankful for them for readily accepting him into the group.

In the winter of 2014, during Couper’s first season as a basketball cheerleader, Sean Summers, MHS alumni and a member of the Ravens cheerleading team at the time, visited Couper and the rest of the team. Meeting Summers sparked Couper’s interest in pursuing cheerleading after high school.

“When I first started cheerleading, I still wanted to play football in college, but as I progressed in my cheer career and in my football career, I could see myself going farther with cheering,” he said.

Couper stayed in contact with Summers throughout high school. After graduating, Couper began going to open gyms with Summers, which allowed him to make connections with other men on the Ravens cheer team.

“Sean taught me everything I know and made me fall in love with the sport,” said Couper.

Couper’s love of cheering and fun experiences at open gyms with other male cheerleaders inspired him to try out for the 2017-2018 Baltimore Ravens cheer team. Initial tryouts were in March of 2017 and consisted of two intense days of stunting and waiting for call backs.

“It was easier for the guys because we only had to deal with one stunt,” said Couper, “while the girls had to learn dances and then worry about their stunts and their jumps.”

On the first day, when it came time for Couper’s audition, he was paired up with a female member of the team and had to perform a stunt of his choice in front of 14 staff members.

“Even though I hit [the stunt] when we were practicing before the audition, I was still super nervous because if one thing goes wrong then the whole stunt is done,” he said.

Luckily, Couper pulled off the stunt and was called back for the second day of tryouts.

The second day, Couper increased the level of difficulty of the stunt he performed and after hours of anxious waiting, was called back for final tryouts at the Ravens training facility.

“It was super nerve-racking. Especially for me, being a 19-year-old kid coming out of high school, you don’t know what to expect.”

For final tryouts, Couper, as well as the other males trying out, had to do a stunt with every single girl there. This was a difficult task for Couper as there were 28 different girls he had to lift.

Couper was one of six other news males to make the team; there are currently 21 males total. He said that everything went really well for him during tryouts and he was fortunate enough to be friends with some of the other guys who were able to give him advice.

“The feeling of cheering doesn’t match anything else that I’ve ever experienced,” said Couper.

After working a full-time job at an HVAC/plumbing company, Couper will be practicing and working out at the Ravens practice stadium twice a week to prepare for the upcoming football season.

Couper will now be doing stunts and cheers alongside 50 other members of the Raven’s cheer team during the 2017-2018 football season, filling commercial breaks at M&T Stadium with the joy he once brought to Knight Field.