The Round Table • December 20, 2016 • https://www.mhsroundtable.com/featured/locks-and-keys-locks-first-place-for-mhs-teacher-in-national-art-competition/ 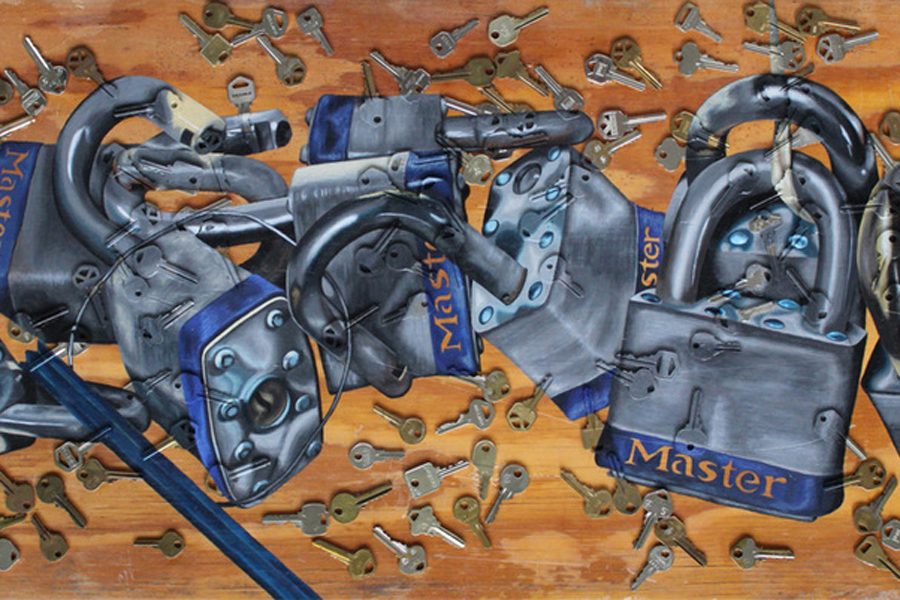 By Sophia Heimbrock, Round Table Reporter

Lehman’s winning painting, “Locks and Keys”, was shown at the Maryland Federation of Art’s Strokes of Genius exhibition from October 28th to November 26th. The painting is the sixth installation of Lehman’s “Workspace” series. “It’s all inspired from my dad’s wood shop,” said Lehman. “I think I get my creative nature from him.”

“It’s kind of an homage to my dad and his creative process,” Lehman added. “I think it has a sturdy, strong look to it. It all seems very strong and masculine.”

Her family plays an important role in Lehman’s career as an artist. “They’ve always encouraged and supported me,” Lehman said. “I was always drawn to art. I was always good at it, always enjoyed it, but it took me a long time to consider it as a career. And my mom always said I would be a teacher…so art teacher was perfect.”

As a reward for winning first place, Lehman was given $500 from the Maryland Federation of Art. When asked what she was going to do with the money, Lehman said, “I don’t have any grand plans for it. It’s just nice to have.”

“Locks and Keys” is currently priced at $3,000. “It’s my favorite piece, I think,” said Lehman. “I’m very attached to it.” The painting took about one hundred hours to complete.

As for future projects, Lehman said she’s moving on to “automotive imagery”. “I think I want to evolve that same concept (in “Locks and Keys”), moving into automobiles,” she said. “I still have the wood and the metal, but the imagery is coming from car wires and car parts.”

Lehman’s success as an artist helps her be an example for her art students. When asked if she had any advice for young artists, Lehman said, “If you hit a brick wall, maybe that’s just redirecting you into a different avenue, or making you work harder. Once you find that passion