The Round Table • March 16, 2018 • https://www.mhsroundtable.com/featured/opinion-asl-must-be-treated-as-a-foreign-language/

Column: ASL must be treated as a foreign language 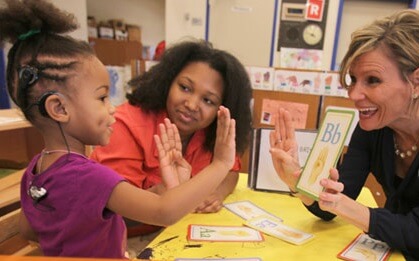 By Leah Heon, Round Table reporter

Over 1.2 million Maryland residents are deaf or hard of hearing. Only 193 out of some 5,300 colleges in the U.S. accept American Sign Language as a foreign language credit, which is a credit needed to graduate in many cases. This is unjust, for students who are unable to hear as others deserve a fair academic chance.

The topic of hearing loss is close to my heart because my brother was born with Large Vestibular Aqueduct Syndrome, a structural deformity of the inner ear which causes hearing loss. Since the age of four, he has lost all hearing in his right ear. Although he is now a successful college student, education has not always been easy. I have witnessed every struggle he has gone through, noting how any sense of hearing loss makes every task in school that much more challenging.

Hearing loss tends to have a severely negative effect on a student’s ability to learn. Studies show that 25 to 35 percent of students with hearing loss are at risk of failing at one or more grade levels. Problems with learning are often a result of the delays in development of language and speech caused by hearing loss. This causes children to be often misidentified as having behavioral problems or ADD/ADHD, since they may develop issues with attentiveness in class.

That being said, learning is already difficult enough for students who suffer from hearing loss, try adding a foreign language to the mix, and it will soon become nearly impossible for them to maintain patience with education. However, just because someone may not be able to hear as well as another, does not mean they are any less capable of understanding information.

Many argue that ASL does not obtain a specific culture, as all spoken languages do. This serves as a reason for schools to not include sign language as a foreign language credit. The idea that each dialect of sign language does not have its own culture is a misconception. Deaf sociolinguist Dr. Barbara Kannapel defines deaf culture as, “…a group of people who are deaf and have their own language (ASL), values, rules, and traditions.” This supports the idea of ASL obtaining its own culture, separate from traditional American culture.

All in all, each and every student deserves an equal chance to succeed in school, no matter their handicap. In order for this to happen, ASL must be considered a foreign language. This act will not only improve the success rate of hard of hearing students, but will also encourage others to learn sign language, which serves as an immensely helpful skill.