The Round Table • February 17, 2016 • https://www.mhsroundtable.com/featured/snapchat-is-just-another-world-for-teens/

Snapchat is just another world for teens 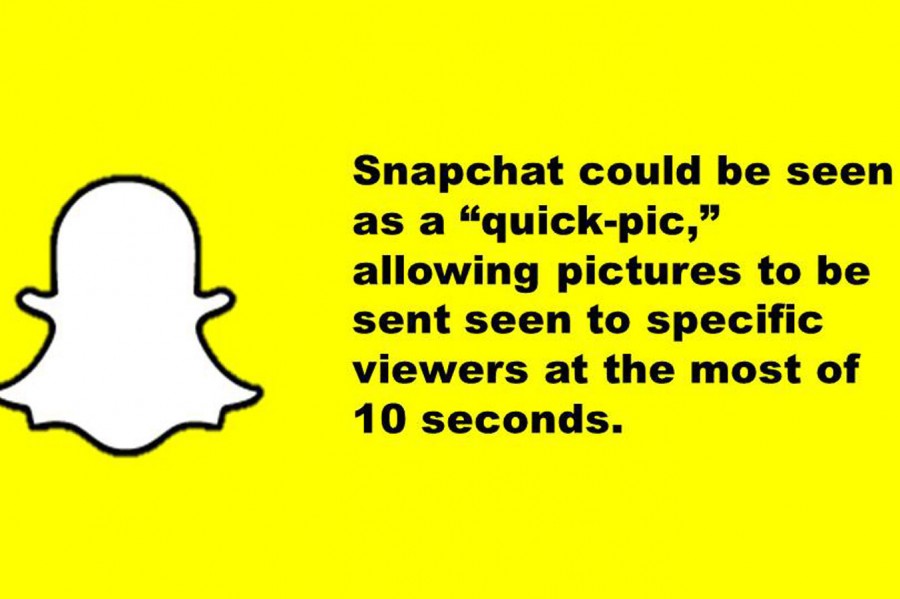 Students file into Middletown High School around 7 a.m., phones in hand. They sit down at the rearranged lunch tables, talking with their friends and peers. Not only do they hold conversations in the real world, but some students are deep in a virtual realm. Phones and other devices are inseparable from them. Teens in high school have made technology a necessity for their everyday lives.

Different applications and software are downloaded every day to fulfil particular needs of these students. Whether these programs are simply used for personal matters or have an operational purpose, the applications mainly allow students to keep in touch with others.

Snapchat, being one of the newest ways of communications and social media today, has become popular among teens in school. Teens use the app on their mobile phones as a way to keep in touch with their friends in a quick manner, but many adults struggle with its potential inappropriateness and ephemeral nature.

Snapchat could be seen as a “quick-pic,” allowing pictures to be sent seen to specific viewers at the most of 10 seconds. That might have been true at the beginning of the app’s use; however, updates have changed the nature of Snapchat, including more functions than simple quick-pics.

“Snapchat itself is an emerging technology, like they’ve added some features to it. So maybe some of the changes are going to make it more functional in a learning setting,” said MHS Principal Lee Jeffrey.

Currently, the app allows users to text their added friends, which is mostly non-retraceable. Also, a 24-hour story allows a slideshow of pictures to be seen for a whole day. To adults, though, there is no “archiving” of these pictures, said Noah Kady, MHS journalism teacher.

“There is no accountability and no archiving of it, but you all don’t seem to care about it,” he added.

Many teachers at MHS don’t really know much about Snapchat, and they are still deciding whether the application is an acceptable tool. There are always going to be students, though, who break the rules and use these tools in a negative way.

MHS Assistant Principal Brooke Hontz said, “The main concern that we have had coming across our desk in regards to Snapchat is the disappearing pictures… but because it disappears, it is hard to prove” that the pictures sent are actually inappropriate.

Teachers at MHS are skeptical about Snapchat and its possible educational uses. Several teachers said they could not think of what type of educational ways Snapchat could be implemented into high-schoolers’ daily routines, but they are open to ideas.

Some students, however, have come up with different ways to apply Snapchat in the classroom. Owen Migdal, MHS sophomore and social media editor-in-chief for The Round Table, said, “We could have someone on the field getting the environment of sporting events and the crowd, so that people who aren’t at the games could feel like they’re apart of the culture here.”

Migdal also gave an example of how the NFL has a Snapchat, posting videos and pictures purely for informational communication. MHS teachers and The Round Table could cooperate and create a Snapchat feed mainly for advertisements on different events going on in the school. Then during the event, those who could not attend or participate could get a quick coverage update.

This idea might have potential, but students and faculty members still must abide by the BYOD policy. Hontz said, “As a part of the BYOD policy, you’re not supposed to be taking photographs of other people at all, regardless if it is for Instagram or on your phone just with a camera, unless it is being used for an educational purpose (e.g. art class pictures or spirit days).”

Students and staff members at MHS try to find the “happy medium,” said Jeffrey. High schoolers and the staff need to try to work together to use the BYOD policy in an educational way but also allow teens to have free time on their devices.

Another possible way to add Snapchat to daily routines is use the Discovery setting. This portion of the app suggests around nine popular publications. By clicking on these suggested options, Snapchat will take readers to the top videos and stories of that publication.

These stories on the Discovery page could add a topic to talk about in either a communications class or social studies class. Debates about current events could add for more ideas being spread from the students themselves.

Even with all of these different ideas, though, teachers don’t decide what is allowed to be accessed on the school Internet. As technology evolves, Frederick County often changes its policy on what is and isn’t allowed. Even teachers are blocked from certain websites.