The Round Table • December 8, 2016 • https://www.mhsroundtable.com/featured/the-boys-are-back-with-a-state-title/

The boys are back with a state title 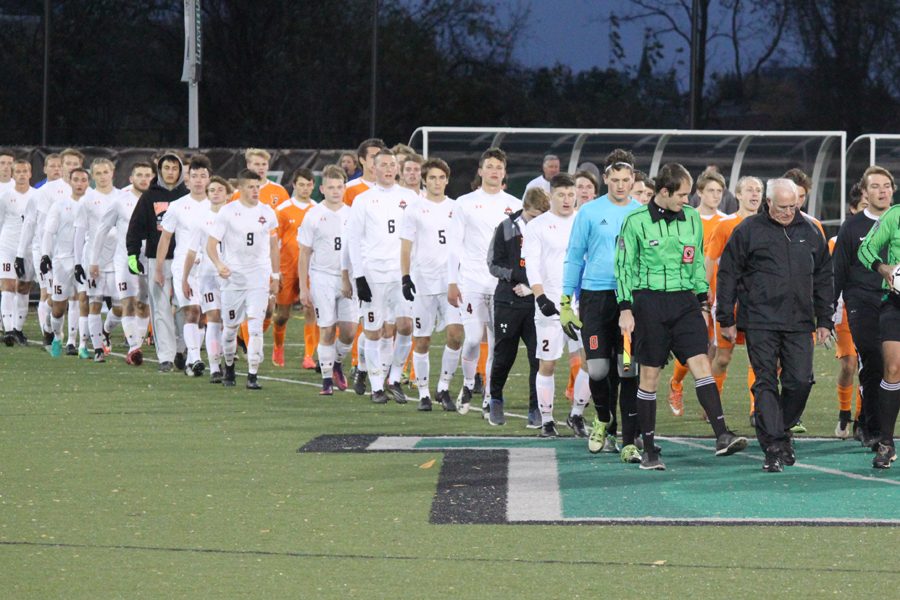 Right before the big game, the boys varsity team lines up and waits to get started. -Photo By Jack Sullivan

By Madison Blumenauer, Round Table reporter

On a cold fall night MHS varsity boys’ soccer is at Loyola University. They play against Fallston in not only the rain, but also sleet/snow for the MPSSAA 2A state championship. The energy is high from the crowd and anticipation is high from every person there. The game is tied and tension is high. It isn’t until senior Evan Joseph scores the first point of the game that the Knights get hyped and believe they have a true chance at winning.

Winning states for the second year in a row, the MHS varsity boys’ soccer team beat Fallston, 1-0, at Loyola University on Nov. 19, 2016.

The Knights fought a hard battle but eventually came on top.

“It was a hard game, but we kept persevering and eventually we did it,” said MHS junior Timmy Kovalchick.

There was a lot of hope that the team would win after having a season of 19-1 up to that point and having won states the previous year.

“It felt pretty good. It felt better than the first one because it was harder and it was a lot more pressure,” said MHS senior Evan Joseph.

When asked about the win the players had much to say.

“To win a second state title this year was crazy. Knowing all of the practices and time put in throughout the season and offseason paid off is a satisfying feeling,” said MHS senior Grant Brandenburg.

“It was really really nice to win a second time with all the boys I have been playing with since I was really young. We got to play every single game we could’ve by going to states and winning is the best way to end the high school career,” said Tuckey.

The team worked hard and had fun while doing it.

“I’ll always remember how close we all were, all of the memories of us just hanging out and having a good time,” said MHS senior Danny Bertoni.

The whole community was glad for the team and it was obvious they were grateful for the win.

“Winning a second consecutive state championship has been a blessing. It’s humbling to think about all the amazing players that have represented MHS soccer over the years and to win something so elusive twice is an honor,” said Brandenburg.