The Round Table • February 24, 2017 • https://www.mhsroundtable.com/featured/the-unknown-history-of-african-american-people-in-middletown/

The little-known history of African Americans in Middletown reveals itself 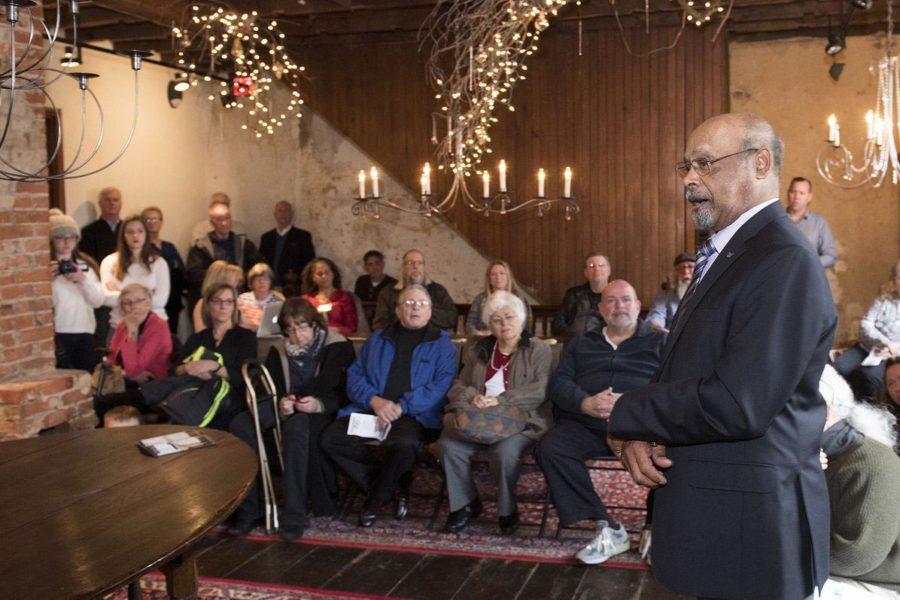 David Key, president of the African American resources, Cultural Heritage Society speaks to the large crowd gathered at the Stonebraker and Harbaugh-Shafer building, about African American history in Frederick County

By Caroline Schaeffer and Marley Pratt

It’s 1:15 p.m. on the dot at the Stonebraker and Harbaugh-Shafer building in Middletown. At first glance, it’s not obvious, but this well-kept house, mortar chipping on the walls to reveal the horsehair plaster keeping it together, housed a slave who eventually ran away from his owner.

“It’s upstairs,” says the host, a middle-aged blonde woman who points to the next room where a creaky staircase leads up to a library crowded in a crescent moon around three people: Edie Wallace, a historian, Julie Maynard, a writer for the Middletown Valley Citizen, and David Key, the sole African American on the panel, a war veteran, and president of the African American Resources Heritage Society.

Filled with white citizens and a handful of African Americans, it’s not apparent this was for the history of a minority group which Middletown now lacks, but for once there was once such a large population that a black school and church were built, both of which have since fallen into disrepair and demolished. Commonly referred to as “Little Africa,” this section on South Jefferson Street was one of the largest free populations of African Americans in Maryland.

Light streams in behind the speakers, and in the small room, every chair is taken and some floor space, as well. On the enormous wood table centered in the room, four plastic bottles of water sit waiting for a thirsty patron. On the western table where chairs circle, a reporter from the Frederick News-Post kneels, clacking on her computer as a photographer snaps shots of the panel.

When introductions are over, Key begins his speech. Hailing from Frederick, he was surprised when the Middletown Historical Society invited him to speak, but he accepted gratefully. He spoke quickly about the integration of two black boys into the white Middletown school in the 1950s and advocated for the FCPS schools as a whole. He touched on the apparent disappearance of black residents in Middletown. For the most part, they simply dispersed over time, and while the reasons are not clear, he drew connections to the Great Depression of the late 1920s and other work-related reasons. Nowadays, the population of Little Africa is reduced to one person on South Jefferson Street.

After Key finished, Wallace talked about the free population of African Americans during the Civil War. Frederick, as a whole, had a significant number compared to other areas within the state. In all of Frederick County, unusually, Middletown had a black school near the church in 1865. While students had to pay a fee to attend, it was a small house where they could receive up to a seventh-grade education.

As for the black church, recently a graveyard was discovered with both marked and unmarked graves. The historical society has a collection of all the known names, but it’s impossible to say who else is buried there. The cemetery is being cared for by community members and Boy Scout troops.

Maynard spoke more about the church, saying it was tiny but had a congregation of about 50 people. There was an upper story where the elderly and children watched. During the summer, it was stiflingly hot, but mostly they came together during religious celebrations like Christmas or Easter.

In the 1820s, Middletown had a substantial freed black men population with more than half being free.

Maynard touched on the racist origin of the Snallygaster. Of the beloved myth, it is believed to have come from a tale told to frighten slaves from running away. It didn’t work well, though, because the former owner of the venue, Peter Shafer, had his slave run away.

While it doesn’t seem apparent at first from looking around, Middletown had its own Little Africa, but poverty and racism alongside turmoil in the economy drove out the once sizable black population of Middletown. Left over now are a few aging reminders of how surprisingly forward the town was.

Now, a few unmarked graves and a stone foundation pay their respects to a nearly forgotten history.