The Round Table • February 6, 2017 • https://www.mhsroundtable.com/roundtable/news/mhs-tightens-school-security/ 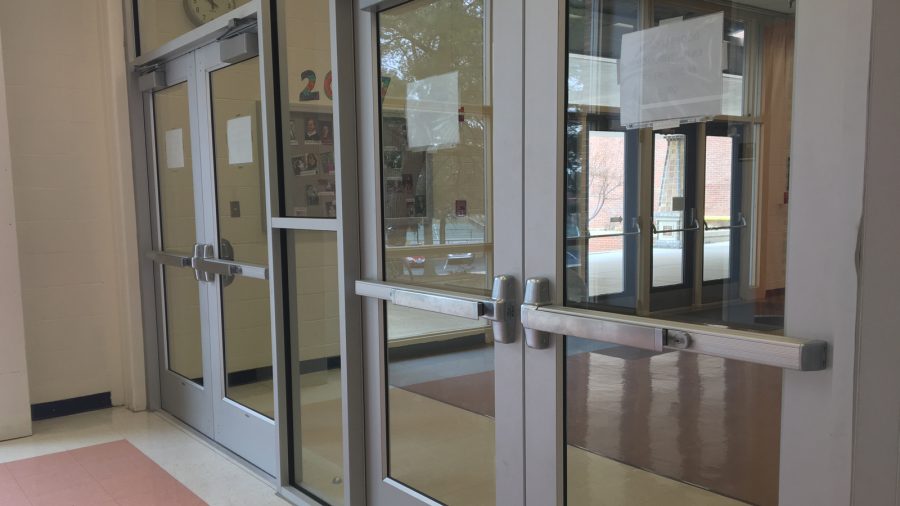 These are the two doors that were put in on the wing by the Heritage Room.

Students walk through the front doors of Middletown High School, but things are not as they have always appeared. To both the left and right are glass doors, looking like something out of a downtown office building in New York City.

MHS has installed a glass vestibule at the front of the building to enhance the school security. It’s a far cry from the past, when security wasn’t the concern it is today.

“Many years ago the doors would be left open so there would be some fresh air and the breeze would come in,” said MHS principal Lee Jeffrey.

The vestibule goes from the bottom of the floor to the ceiling, which is about 10 feet tall. There are two sets of doors with each vestibule. They are to be kept locked at all times during the school day.

The one set of doors was put up over the break near the Heritage Room over the holiday break and the other set was put up on Jan. 23. According to MHS assistant principal Brooke Hontz, the decision to install the glass vestibule was made by FCPS.

“The goal is for all schools in Frederick County to have a closed-off lobby, which would require visitors to filter in through the office. This way, we can make sure that all identifications are verified and individuals are signed in,” said Hontz.

The vestibule will not impact exiting the school but will have an impact on students who want to exit the school and then come back in.

“When you go through the front doors, you are now required to go through the office. You can’t go to the left or to the right anymore,” said MHS assistant principal Danny Rumpf

A concern for different extracurricular programs was how they would be able to get in and out of the school through the front.

“For after­-school activities such as sports, band, etc., the advisor, coach or director will have a key to open the doors to the vestibule. This is so students won’t have to go through the office to enter and exit the school,” said Jeffrey.

This new security system will help to ensure that after 7:30 a.m. everyone is required to enter and exit the school and go through the front office and no one should be going through any of the side doors.

Rumpf said, “There is no reason students should be at the side doors. If there is someone, even if they are your friend, you or an adult should tell them to head to the front of the school and buzz in.”

Students will also not be able to cut through the lobby during the day, which will require a little bit of planning for students to get to and from class.

The vestibule adds another layer of security. While the school already has the standard buzzer system, until the addition of the vestibule, people could still easily walk in when the door was opened for someone else.

“We ask students to not open doors for others, which we know is hard because you’ve grown up with your parents telling you to be courteous to others – be a good neighbor and help out. But we can’t have you do that at our school due to every individual’s safety. If you see someone, whether it is an adult or not, you need to go to an adult, like a staff member, and let them know there is someone outside,” said Rumpf.

Hontz added, “Not only does this help to prevent intruders, but we can account for individuals (non students) in case of an emergency such as an evacuation.”

One of the main concerns staff and students are having is how will this new security system actually benefit the school’s security when there is a lack of security in the back of the school.

“We have tried to enhance security in the cafeteria by locking the doors during school hours. We even had them locked during lunch, but this impacted students’ ability to eat outside. We now only unlock them during lunch, when adults are supervising the cafeteria and can see if someone who is not a student walks in,” said Hontz.

Even though the security of the school is more enhanced than it has been, people are still allowed to enter the school.

“Any person can come on school property if they are there with proper identification, are there for school business and go through the office,” said Jeffrey.