The Round Table • April 2, 2019 • https://www.mhsroundtable.com/roundtable/opinion/eilish-continues-to-impress-with-debut-album-when-we-all-fall-asleep-where-do-we-go/

Opinion: Eilish continues to impress with debut album, “WHEN WE ALL FALL ASLEEP, WHERE DO WE GO?” 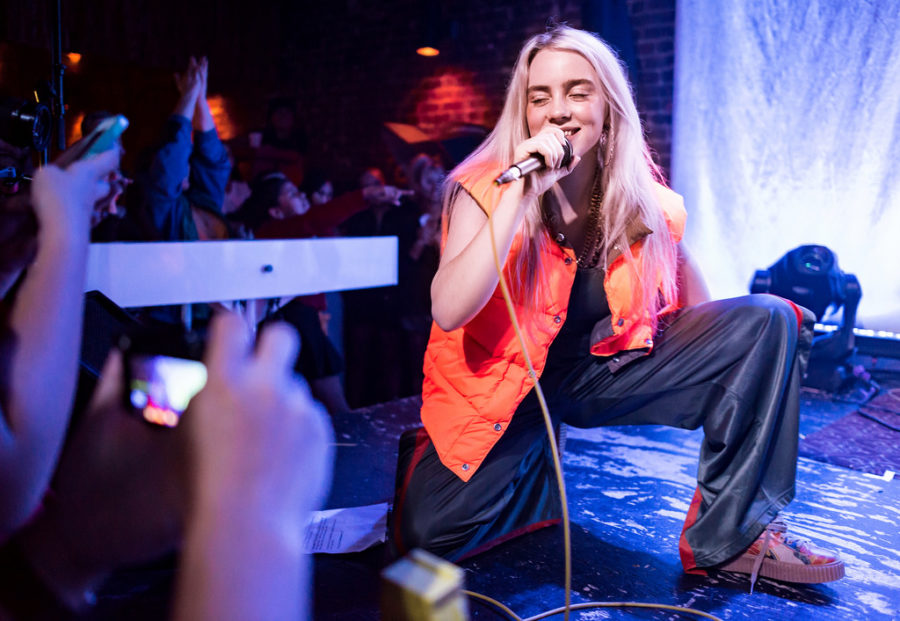 Seventeen-year-old Billie Eilish has taken the world by storm with her music again. And this time, she gives us her debut album, “WHEN WE FALL ASLEEP WHERE DO WE GO?”

This isn’t the first time Eilish has shocked us, she seems to do it time and time again. Her music is something so different from what we’re used to hearing that we never know what to expect from her. Sure, she does have some traditionally, “pop” sounding songs, but the majority of her music has focused on the visualization of it. Her lyrics are so vivid that as you listen it’s almost as if you can see it being reenacted in your head.

This album is no exception.

The album starts with, “!!!!!!!” a thirteen second clip of Eilish laughing with her friends and introducing the album. A creative and unexpected start, but nevertheless, a start.

Next, we are introduced to, “bad guy.” The start of the song is intense and almost rock-ish. The song is another example of Eilish’s ability to create music that you can visualize. Her vocals come in low, something we wouldn’t have traditionally expected from Eilish. As the song continues though, the beat changes while her lyrics continue to give examples of all the ways this “guy” she’s talking about is a terrible person. It’s a good first song for this album, because it showcases all of her talents and production abilities.

Another interesting song, “xanny” starts off very slow and almost whiney. It sounds extremely sad, and it is. Her lyrics highlight the difficulties behind addictions in general. While she continues to repeat, “I don’t need a xanny to feel better” it seems to be the opposite. While she pleads to keep the drug away from her, the deeper meaning behind it is the rejection and emotions she feels without it.

A song that needs to be talked about however is, “my strange addiction” When I was first listening to the album my cousin – a former entertainment writer for RT and knowledgeable musician – texted me and said, “This is pretty insane production-wise. This girl’s onto something. Especially check out “my strange addiction.” She samples The Office.”

Immediately, my interests were peaked. So, I played the song. This was something I wasn’t expecting to hear, especially because it starts off with, “No Billie, I haven’t done that dance since my wife died.” in Michael Scott’s voice. Eilish has been vocal about her love for The Office in the past, but her ability to sample it into her song is something revolutionary. The song is catchy and impressive, but proves the immense amount of talent the seventeen-year-old holds.

Lastly, one of my personal favorites from the album is, “8” This song is another one of Eilish’s slower songs, but the catchy sound mixed with the lyrics that tell a story of rejection speaks to me. Additionally, it is the eighth song on the soundtrack and the first song of hers to feature another artist. It sounds similarly to, “i love you” but in that track she is the one doing more of the rejection.

This album features fourteen amazing songs. Some, are songs that have already been released as singles, and some are songs that we are just now hearing for the first time. While not all were mentioned here, all have a huge impact.

Eilish has strayed from the traditional confines of a “pop” artist and has made herself almost unclassifiable. She has impressed the music community with her ability to continue to evolve as an artist, especially at such a young age. Her production and visualization of her music has been unmatched, and this album lives up to all of those expectations and more.