The Round Table • November 19, 2019 • https://www.mhsroundtable.com/the_latest/carbon-plate-running-shoes-innovation-or-discriminatory-advantage/ 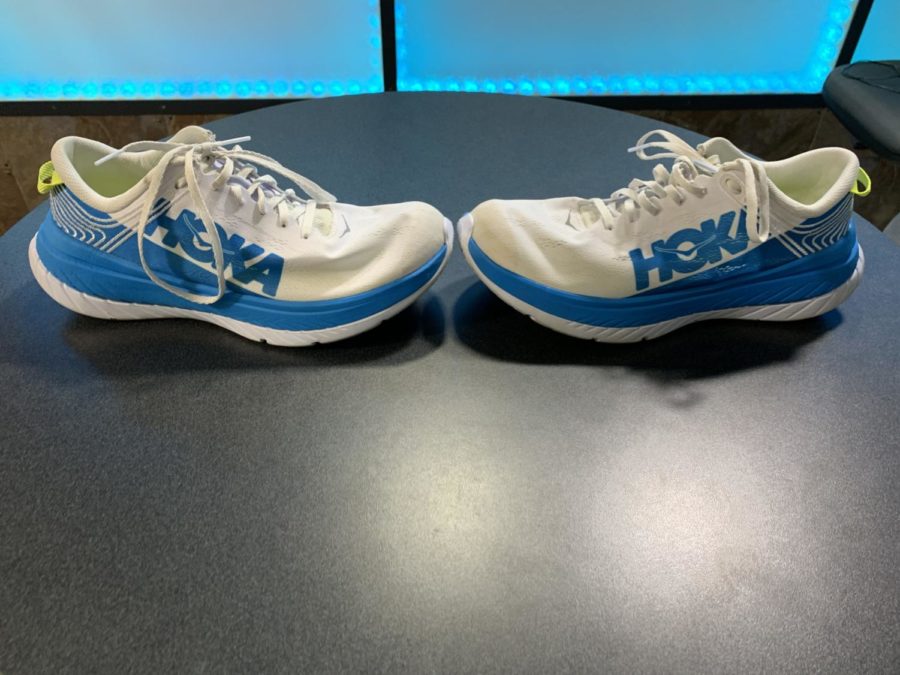 Carbon plate running shoes have taken over the distance running world, leading to an onslaught against many current records. However, not everyone thinks that carbon plate technology is good for running.

Nearly every popular running shoe brand has come out with a carbon-plate running shoe, including Nike’s Vaporfly Next%, Hoka’s Carbon X and Carbon Rocket, Adidas’s Adizero, and even Sketcher’s Speed Elite.

It all began in 2017 with Nike’s Breaking2 Project with Eliud Kipchoge, when Nike unveiled its Vaporfly 4% running shoe, which would end up drastically altering distance running and would spark a new host of world records. [one-sentence summary of sub-2 hour marathon]

Via Instagram, former Olympic marathoner Ryan Hall called out Kipchoge’s 2-hour marathon shoes. Hall wrote, “With all due respect to @kipchogeeliud (Eliud Kipchoge), as he is clearly the greatest marathoner of all-time regardless of the shoes he is in, when a shoe company puts multiple carbon fiber plates in a shoe with cushion between the plates it is no longer a shoe, it is a spring, and a clear mechanical advantage to anyone not in those shoes…”

Hall would later add in a clarification post: “But I don’t think athletes should be losing races because they are in a shoe that doesn’t have a spring-like mechanism in them.”

MHS cross country and track and field coach Alan Caldwell said, “It’s an arms race. If you look at the records from the past two years, nearly everyone is wearing Vaporflys (Nike’s carbon plate shoe).”

This fall several pictures showed New Balance athletes wearing blacked out Nike Vaporfly, as if they had redacted their sponsored shoe to have somewhat of a chance in their race. In response, New Balance came out with its own carbon-plate shoe, the FuelCell 5280,  but it isn’t designed for races further than the half marathon. Many notable running shoes brands,including Brooks, Saucony and ON running, don’t have have a carbon-plate running shoe.

According to rule 143.2 in the International Association of Athletics Federations rulebook, running shoes “must not be constructed so as to give athletes any unfair assistance or advantage,” and though the shoes do give the runners who wear them a significant advantage, they don’t currently violate IAAF regulations.

Testing of the Nike shoes has shown that they give runners around a 4 percent advantage over wearing a different running shoe, a statistic Nike has advertised.

“At the northeast regional for college cross country, they had a road race because of the course being covered in snow, and the top two teams wore Nike Vaporflys,” said Caldwell.

MHS varsity cross country and track athlete Luke McLister said, “It’s a new concept, so if it’s going to be advertised as the carbon plate is going to propel you forward and help you, then I think people who can afford carbon-plate shoes will buy them because they want to get that edge over their opponents in their races.”

It’s clear that carbon-plate shoes give the user a significant advantage, but at this point the IAAF and International Olympic Committee believe that the shoes don’t currently warrant a ban, but many who are against carbon-plate shoes are lobbying against their presence in the upcoming 2020 Olympics.

MHS varsity football quarterback Reece Poffenbarger said wearing the shoes is different than equipment improvements in other sports. “The shoes give the user an unfair advantage, and people shouldn’t lose races because of the shoes they wear,” he said.

McLister also said, “If everyone was wearing them, it would be fair, but since not everyone prefers them, I think [the IAAF and Olympic Committee] just shouldn’t allow them.”

This isn’t the first time there has been controversy over the use of carbon plates in running, just not in the way people might think. In 2012, Oscar Pistorius, a South African sprinter with no leg below the knee competed in the 2012 London Olympics (that’s correct; Pistorius’ time was so fast that he qualified for the standard Olympics), and there was a large public outcry over just how big of an advantage his carbon-plate lower legs contributed to his performance. Now with carbon plate shoes being available to runners everywhere, the controversy is mounting.

Caldwell is unsure about the future legality of the shoes in competition. “The jury’s still out,” he said.

The argument of those in favor of carbon-plate shoes is the sport is constantly changing and singling out a pair of running shoes isn’t warranted. Those in favor of the shoes point to Jesse Owens earning gold in at the 1936 Olympics in Berlin on a track constructed of cinders, Roger Bannister running the first sub-4-minute mile in leather spikes, and Adiba BIkila winning a gold medal running barefoot in the 1960 Olympics in Rome.

This reporter owns a pair of Hoka Carbon X’s,  and despite getting them after being forced to take four weeks off due to injury, became significantly faster than previously, dropping his mile PR, which was just over 5 minutes and 40 seconds to (while on a six mile run) completing the second mile in 5 minutes and 24 seconds.