The Round Table • January 10, 2020 • https://www.mhsroundtable.com/the_latest/review-fine-line-is-an-album-of-honesty-and-self-acceptance/

Review: ‘Fine Line’ is an album of honesty and self-acceptance 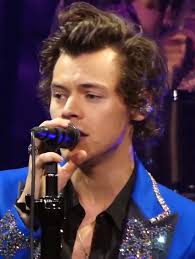 Opening the album with the light and inviting melodies of “Golden”, Styles introduces his 12-track record. Though listeners should not get too used to this airy tone, for the album has a variety of genres built within each track.

Later, listeners have the opportunity to think about who they are – not to others – but to themselves. “Lights Up” is an ode to personal acceptance with the repeating phrase, “Do you know who you are?” As the first song Styles released from this album in September, he mindfully set the tone of self-reflection for his new era.

Attributing most of this album’s writing to a recent relationship, Styles writes about the pit of sadness he found himself in with “Falling” and times of bliss with “Adore You”.

Although this album is emotion-heavy, the raw emotion truly comes out in “Falling”. With lyrics like “What am I now?/What if I’m someone I don’t want around?” Entering a new territory, Styles lets the listener in and allows them to see another layer of him – one of which artists do not always like to share.

On the other hand, “Adore You” glorifies the beginning of something and adds a fun and optimistic tone to this otherwise-melancholy record. With lyrics like “You’re wonder under summer sky” and “I’d walk through fire for you”, Styles exudes an extreme infatuation with someone, in heavy contrast to the majority of other tracks.

“Cherry”, perhaps the most disclosing track on the album, reveals jealousy and the pure sadness of losing someone to someone else. The simplicity of this song is what makes the piece so effective. When Styles said, “I just miss your accent and your friends/Did you know I still talk to them?”, he is able to convey such personal attributes that only apply to a specific person, while making everyone feel the lasting impact of his emotion.

Another unique aspect which falls at the end of “Cherry” is an unexpected recording of a woman speaking French. Styles disclosed the voice to be his ex-girlfriend Camille Rowe’s phone conversation. When translated, this discussion does not seem to hold any significance, although the decision to add this piece into the track was both brave and brilliant. Rarely do mainstream artists like Styles insert such artistic and personal memories into their music.

While “To Be So Lonely” juxtaposes a playful guitar with lyrics that reflect disappointment, “Sunflower Vol. 6” contributes an upbeat tone along with positive lyrics like “I’ve got your face hung up high in a gallery”.

While the majority of this album’s lyrics are blunt and frank, “She” offers a cryptic approach. Styles opens this track with “Nine in the morning, a man drops his kids off at school” and later introduces a British-sounding “sends his assistant for coffee in the afternoon, around 1:32”. Marked at just over six minutes, “She” is one of the lengthier songs on this record and introduces an extended guitar solo, adding to the peculiar nature of this track.

Adding to this mysterious theme, Styles chooses to stay out of the social media sphere, from time to time wishing his followers a happy holiday or encouraging them to vote. His relatively quiet voice – which contrasts his voice on a stage – speaks loudly. In a time where artists constantly promote their work, it is refreshing to see an artist not try quite so hard.

The closing track “Fine Line” is the masterpiece of this album. This song articulately summarizes the overall message of Fine Line: reflection and hope. For the first half of the song, Styles reminiscences on the ups and downs of a relationship with lyrics like “You’ve got my devotion, but man, I can hate you sometimes”. Repetition is a crucial writing technique in this track, with “We’ll be a fine line” repeating throughout the latter half of the six-minute confession.

Serving as a slower tune for the first portion, “Fine Line” takes a sudden detour into a drum and horn instrumental. Styles mindfully creates a liberating sound around minute four, when he couples the promising lyrics of “We’ll be alright” with the explosion of percussion and woodwinds to create the final release of emotion needed to complete this album.

Although Styles is considered a mainstream artist, Fine Line was clearly not manufactured for the charts. Styles illustrates how not trying to get the public’s attention can project a voice louder than any chart-topping track could.