Coach Bolt hangs up her pompoms

By Kaela Pratt, Round Table Reporter 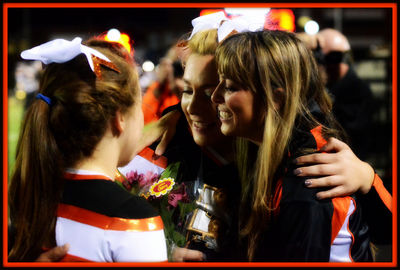 After four years of teaching English and 13 seasons as coach of the Middletown High School cheerleading team, Melissa Bolt Lushbaugh had to step down from her position as head coach and leave her legacy to an all new coaching staff. However, Bolt never envisioned leaving her position so suddenly.

A few practices into the season, Bolt received news from her husband that they would have to move to Knoxville, Tennessee, for his job.

She was in pure disbelief; as well as having to leave her parents and friends, she knew she would have to leave her team right at the beginning of the football season.

“The team as a whole was heartbroken when we found out,” said MHS senior cheerleader Chase Farrow. “At first we thought it was a sick joke, but later realized she really was leaving.”

After spending less than a week on the market, her family’s Myersville home was sold. In two weeks, her family would make the move to Knoxville.

Throughout her many seasons with the program, Bolt was not only a leader and role model for every cheerleader but a positive force in the community, as well.

With the help of the team, Bolt collected donations at games for local families struggling through hard times. She also decked the team out with pink pompoms, bows, shirts and face tattoos every October to support the fight against breast cancer.

Perhaps her most important contribution, however, was the “Do It Right” bracelets; she came up with the idea to have every student-athlete wear a bracelet that said, “Do It Right, Knights,” to serve as a reminder to always show respect, keep a positive attitude, and act as “one team, one family.”

After the team dazzled the crowd during their last halftime performance with Bolt as a coach, the senior cheerleaders presented her with a plaque and bouquet of flowers to show their appreciation.

An emotional announcement thanking Coach Bolt for her continued dedication to the program and the community brought tears to her eyes.

At the end of the night, the Knights pulled through with a victory and the whole team pulled Bolt in for one last group hug, creating a perfect ending to her last game.

“Bolt always wanted to have an amazing performance that would knock the socks off of the fans, and that is exactly what we gave her for her last game coaching,” said Farrow.

Before the sun had even risen the next morning, Bolt and her family said goodbye to their Myersville home and headed to Knoxville to start the next chapter in their lives.

One month after her departure, the team has been adjusting as well as they can. Junior varsity coach Lacee Fogle has stepped up into the varsity head coach position and is trying her best to fill Bolt’s shoes.

“The team is hurt and took this hard. They have positive attitudes for the most part, but you can see it in their faces that they miss her so much,” said Fogle.

Despite the sting of losing such a huge part of their team, the cheerleaders welcomed Fogle with open arms.

Fogle coached alongside Bolt in the past and wants to keep all aspects of her style and her traditions, like two-minute pyramids and team bonfires, alive.

“She was an amazing leader; her being gone from the program breaks my heart and makes me want to continue her legacy that much more,” said Fogle.

Senior cheerleader Jena Wimsatt knows just how much Bolt shaped the program into what it is today.

“This program wouldn’t be what it is today if it weren’t for Bolt. She gave the team positivity, hope, and encouragement. No matter how frustrating it could get, she never gave up on us,” said Wimsatt.

Bolt hasn’t let the distance keep her from helping out and contributing to the team, however. She keeps in contact through social media, supporting the team on game days and continuing to offer advice, ideas and choreography.

While the cheerleaders miss Bolt more and more every day, they will always remember the impact she had on their lives.

Wimsatt said, “Bolt touched my heart in ways that I can never forget. She never gave up on me no matter how much I wanted to, and I will cherish that forever.” 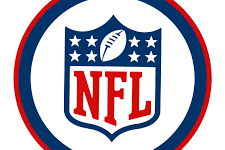 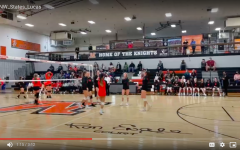 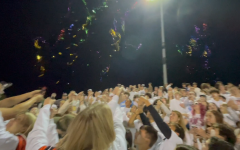 RT+: Knights football takes on Catoctin in a white out